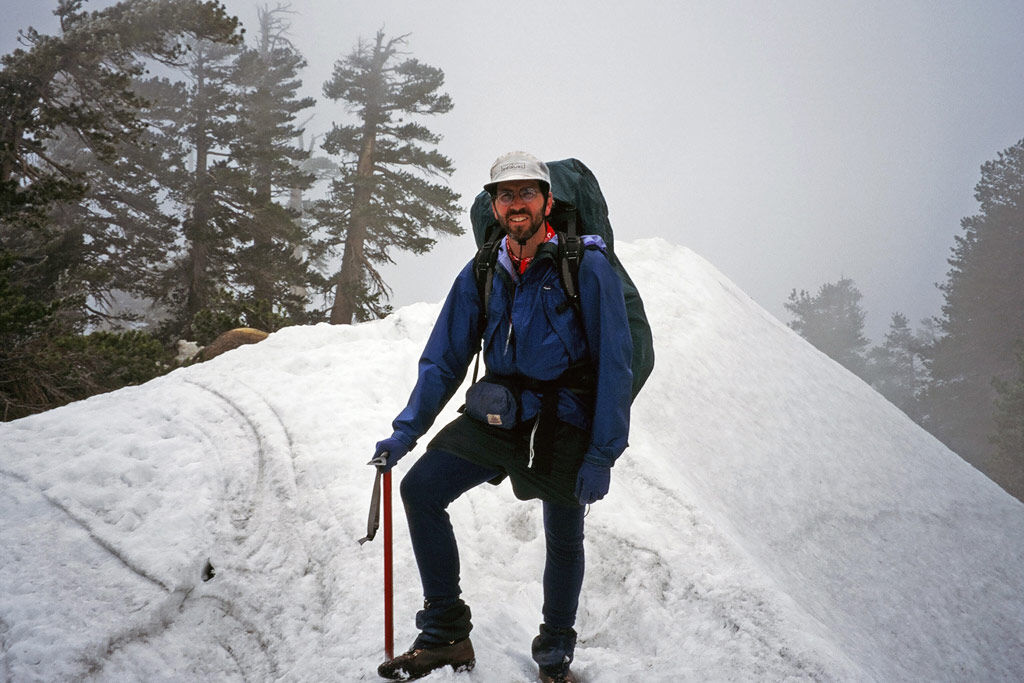 The following article was featured in the Wild edition of PCTA’s Communicator member magazine. This special issue also includes an interview with Cheryl Strayed, a behind-the-scenes look at the filming of Wild and a look back on an historic PCT hike. Get your copy today by becoming a member at $25 or more at https://www.pcta.org/wild/donate/

I waited outside on a chilly November evening to attend a PCTA-sponsored event featuring Cheryl Strayed, the author of “Wild.” Cheryl walked up to the entrance of Keen’s Portland office and store, where she would soon talk to an eager audience, and I said: “Hello, Cheryl!” After a warm hug that Cheryl eagerly gives to so many people, she asked, “Roger, have you come out as Greg yet?”  It was an appropriate and timely question. In “Wild,” I am Greg.

On June 24, 1995, I was on day 45 and mile 634 of a potential PCT thru-hike that began in Campo, Calif., and which I hoped would end at the northern terminus in Canada. I was getting stronger and gaining confidence every day as I eagerly but carefully assessed the snowy Sierra Nevada on the northern horizon. Early in the morning I eagerly descended 1,660 feet to Joshua Tree Spring to get water, not knowing if the next source, Spanish Needle Creek, was flowing. After hiking seven miles, a loud “hello!” from a woman in her campsite beside Spanish Needle Creek broke the quiet songs of the high desert. Her name was Cheryl Strayed.

Here is an excerpt from my journal:

June 24, 1995: She was just breaking camp at 10 a.m. She left Mojave about 10 days ago, or more, and I was the first hiker she met! She seemed very happy to meet me since she had no one to talk to for more than a week. She is hiking about 10 miles per day.

Cheryl had a huge, heavy backpack, the now famous “Monster,” and was taking down a spacious dome tent. I was as stunned to see her as much as she was surprised and very, very happy to finally meet another hiker. We immediately struck up an easygoing conversation of backpacking basics and the snowy state of the Sierra Nevada that appeared to the north. She described some of the things she encountered on the trail, including a bull that gave her a little scare. We talked about hiking, gear, bears, not hanging food and the usual topics that long-distance hikers get into when they meet for the first time. My first impression? This young backpacker seemed uncertain of what she was in for, and it was obvious it was her first long backpacking trip. But in the ensuing days, I would learn not to underestimate the inexperienced hiker.

I did not know Cheryl’s personal story or that it would become a bestseller 18 years later. And she knew none of my stories. Our respective, intense desires to move forward in our lives were unspoken. More importantly, I did not know the word she had written in her journal only hours before we met: “quit.”  Now, more than ever, I am really happy I met Cheryl that day.

Four years earlier, in 1991, I was on my first long hike, not knowing how I would handle 1,000 miles on the PCT. I lugged a 55-pound Gregory Cassin backpack built for the “kitchen sink” through Oregon and Washington. Like Cheryl, I muttered “quit” once, but a friend urged me to keep moving forward. By choosing to keep hiking in 1991, I was reminded of the value of optimism and confidence in my outdoor abilities. In 1992, I volunteered for the PCTA in the Portland area and met numerous PCT veterans on work parties, and I attended the first couple of ALDHA-West gatherings. Through those connections I learned how to get ready for a thru-hike.

I could empathize with Cheryl’s situation at Spanish Needle Creek. My attitude reflected an enthusiastic optimism that I felt within myself. After our first trailside chat, Cheryl eagerly continued north to Kennedy Meadows.

In historical perspective, the PCT in 1995 was much different than it is today. “Meadow Ed” Faubert, whom I met for the first time on June 25, 1995, recalled only about 18 hikers who completed the entire PCT that year, all but a few flip-flopping around the snowy Sierras. Solitude was with me nearly every day.  These days, it is rare.

Cheryl’s first days of solitude ended when a group of hikers who would become important to Cheryl’s story gathered at the Kennedy Meadows campsite that Meadow Ed hosted. Charlie Thorpe, his son Tony, Doug Wiser and Pete Charles were part of our small group. Charlie, a Boy Scout leader, was especially helpful. He taught me knots I still use today and gave Cheryl very detailed help with prioritizing Monster’s contents.  The amusing passage in “Wild” is certainly true … I was there!  Aside from Charlie and Tony’s battle with giardia, we enjoyed those days of hanging out together with Meadow Ed.

Two days after leaving Kennedy Meadows I caught up with Cheryl, Doug, Pete and Meadow Ed at Horseshoe Meadows, where Ed treated us to steak and beer (wine cooler for Cheryl). We each made choices about our hikes. Doug and Pete decided to challenge the high passes of the Sierras. Cheryl skipped the snowy Sierras and rode the bus hundreds of miles north to Sierra City where she hoped to find less snow. Between the two options, not so happy with the snowpack, I joined Cheryl. Meadow Ed was generous once again, driving us to Lone Pine’s Greyhound stop.

During the bus ride, Cheryl wrote in her journal while I gazed at the views to the west and watched the snowy Sierras fade in the distance. During our conversations I learned that Cheryl was interested in the outdoors and travel and hoped to publish her stories. I figured I would one day see her name as author on an airline in-flight magazine rather than on a bestselling memoir. It was my first under-estimation of Cheryl’s talents.

She shared a few details of her past, such as her Minnesota north woods upbringing and a few stories of the people and life-altering events she was leaving behind. In “Wild,” Cheryl wrote about our time in Sierra City. I really enjoyed our talk over a spaghetti dinner, and Cheryl was a great dinner companion. Because I was part of the story, some parts in “Wild” jumped off the pages as I read the book. For example, later that night, according to a passage, she wondered “What would he do if I knocked on his door?” This did catch my attention! I remember that night in my room, my thoughts drifting to the girlfriend in Portland I would soon break up with. I fell asleep, alone.

Cheryl wrote how she was nearly out of money in Sierra City. Note to Cheryl: I wish I had known … I surely would have helped you out! On the evening of July 3, in a campsite we shared near Sierra City, Cheryl surprised me with a tasty desert she had bought in town. Cheryl’s generosity is one of my favorite memories of the hike. She probably spent the last of her money.

I wish I had told Cheryl a little of my own story in camp that evening. After a youth of low self-confidence and a series of ill-fated life choices as an adult, I looked for inspiration on a hike I would very soon find was a struggle to complete. My dad died four years earlier, a relationship snapped to a troubled end, my mother lost her war with cancer, and I lost a great job. Could the PCT be a world that would not repeatedly blow up in my face? Were Cheryl and I guided to the PCT for the same reasons?

In the morning Cheryl and I took widely separate paths. On switchbacks just past the highway we hugged goodbye, knowing we would be hiking separately at our own paces. By now I understood that her need for self-reliance was as strong as mine. Within an hour or two, our resolve to keep going north would be tested. Ahead of Cheryl by perhaps a mile as the trail rounded to a northern exposure, I discovered what we hoped to avoid – miles of deep and icy snow. I had an ice ax and knew how to use it, but the running shoes on my feet were not making it on the icy snow.

I thought carefully – what about Cheryl? Should I wait for her? Instead, I convinced myself that she would retreat to Sierra City. Optimistically, I kept walking, very carefully, until I ran into Mark, a day hiker who was familiar with the Sierra Buttes area. I began to reassess the wisdom of the flip-flop to this snowy section when Mark invited me to stay the night with his family at their rented cabin near the highway and well below the snow. Mark’s offer sounded too good to pass up.

The next morning a trucker gave me a ride to Reno. I lost track of Cheryl for 17 years. It’s a good thing our stories had happy endings. Reading “Wild” encouraged me to reassess my decision to not wait for Cheryl at Sierra Buttes and get off the trail that day in the snow in 1995. Long-distance hiking is a metaphor for life’s daily rhythms, nice sunny days that are often disrupted by dragons that must be faced from time to time. A long hike is a work of art, often imperfect, painted on a canvas hundreds or thousands of miles long. Every experience and conflict on the trail is an opportunity. Hiking reminds me to have a positive attitude and project that onto others I meet.  It is not always easy. Goals are not always achieved, nor are they always needed.

Some people who read “Wild” told me Cheryl changed her mind about quitting after our first meeting at Spanish Needle Creek. Instead, as Meadow Ed correctly suggested, the small group of hikers who gathered at the Kennedy Meadows camp collectively helped Cheryl gain confidence and a feeling that she belonged on the trail. Days later, after we parted, she kept hiking north on snow that I deemed unsafe to traverse. I underestimated Cheryl again! She made it past the Sierra Buttes and many miles more. Reading “Wild” reminded me of the strengths that helped her move forward despite the dragons she was walking away from. This is no surprise because of what I learned about Cheryl during our time together. Her story reminds me of the encouraging words spoken by a trip leader on a 1,000-mile cycling trip I took when I was 17. He helped me find my own strength and confidence to ignore the urge to quit. I took his lessons with me in 1995.

On July 25, 1995, I returned to Horseshoe Meadows in the Sierras to resume my thru-hike, pretending the flip-flop never happened. But the continuity was broken, and the first two lonely, snowy passes were devoid of the camaraderie I felt with Cheryl, Meadow Ed, Charlie, Tony, Doug and Pete. Leaving the trail short of my goal proved to be the opportunity to have a wonderful thru-hike in 1996 and memories that will never part. The journey was fulfilling as my life today can attest. Cheryl must feel the same.

What about Greg, the hiker in “Wild” who is really me, Roger Carpenter? In the upcoming movie, Greg is in good hands under the very skilled direction of Jean-Marc Vallee and actor Kevin Rankin. Let it be known, however, that reading a bestseller in which I am a character made me a little nervous. Now that I have read “Wild” and made peace with my days on the PCT in 1995, I can’t wait to see Greg on the big screen! 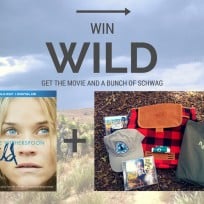 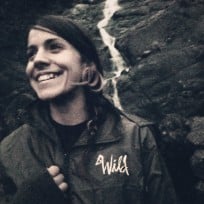 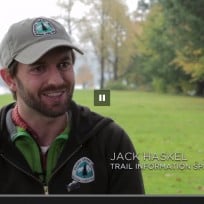 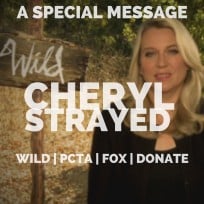 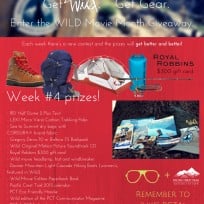 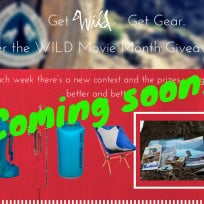 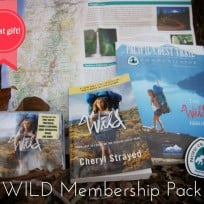 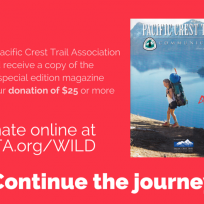